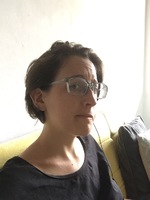 Vicky is a design researcher currently based in London where she is pursuing a doctorate at Loughborough University London. For the last 10 years her research has focussed on developing new design approaches to increasing participation. Her doctoral research builds on this to consider how design might better confront the challenges faced by many people who are locked out of the political process by virtue of entrenched forms of political participation. From 2011, Vicky ran a social design lab at the Singapore University of Technology and Design, before moving to Yogyakarta, Indonesia, in 2016. While now back in the UK, these years were formative in her practice and continue to heavily influence her work.

With Karina Roosvita, Vicky convened Twisted Myth to build a platform of exchange for creatives to explore more broadly the politics of myth. In addition to co-curating the project, Vicky's own creative practice for Twisted Myth will relocate her enquiry from the southern coast of Java to the southern coast of the UK. Through Brexit, the protectionist imaginary of the English Channel has re-emerged in political rhetoric - British shores are said to be under threat from a migrant 'invasion', proposals have been leaked that 'walls' could be built to prevent any crossings from France, and the our fisherman are apparently now free from crippling EU quotas. Through Twisted Myth Vicky will interrogate these claims by recasting the political imaginary of the English Channel away from a myth of national exceptionalism towards a myth framed by social justice.

Myths: a way to talk about politics or a political tool?

When Karina Roosvita and myself began working together back in 2016, the Southern Coast of Yogyakarta, Indonesia, was going through some rapid changes. There had been a huge growth of tourism, a new international airport was being planned, and the the sand mining industry was expanding. We were keen to understand how people along the coast were...